(opens in a new tab) 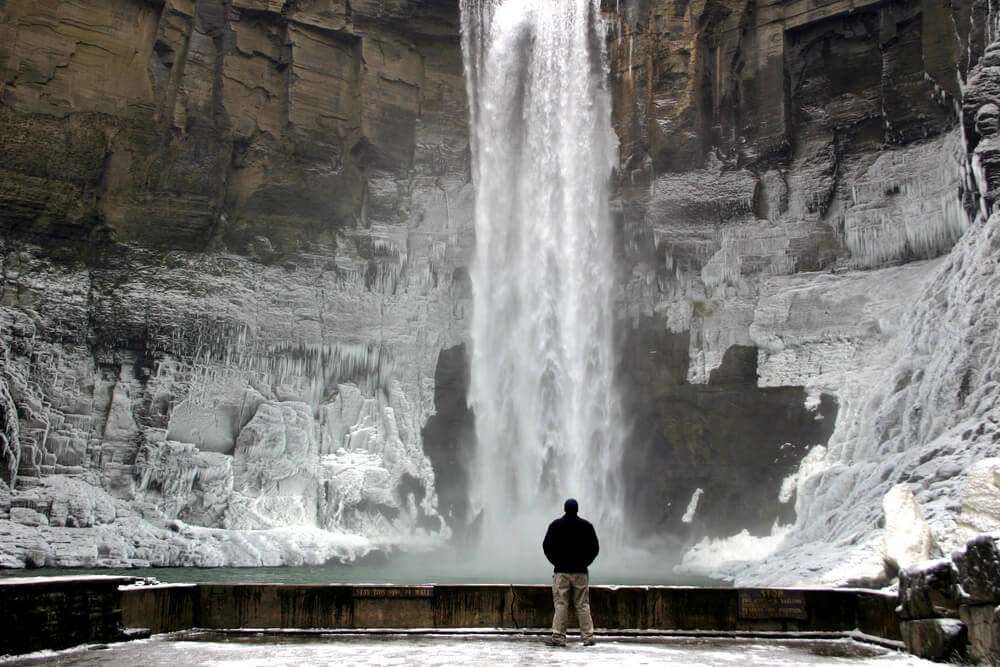 Sometimes it’s hard to put the sheer beauty of the Finger Lakes into words, especially during winter’s frosty peak. Photographers flock to the region to capture the seasonally-preserved waterfalls, hoarfrosted tree branches, blanketed farmsteads, and jagged beaches. Hopefully, by now, you’re contemplating a mid-winter escape to Ithaca. If not, let us add a little more fuel to the fire. Without further ado, here are the six prettiest Finger Lakes waterfalls, regardless of the season.

Fun fact: Taughannock Falls is 33 feet taller than Niagara Falls. A snow-carpeted visit to Taughannock Falls is almost indescribable. The deep, wide gorge transforms into an icy chamber that resembles another planet altogether. The two-mile Gorge Trail winds through the piney terrain en route to a free-flowing, 215-foot-tall giant. Make sure to arrive earlier in the season when it’s still flowing strong.

Watkins Glen State Park features 19 waterfalls, although most visitors will assuredly remember the first time they met Rainbow Falls. Even in the heart of winter, Rainbow Falls and its 18 brothers and sisters maintain its luster. It’s critical to note that snowshoes are recommended for this 2.4-mile, out-and-back journey.

Combine a couple of hours at Watkins Glen with a brief pitstop (and an afternoon picnic, perhaps?) at Hector Falls. This quintessential roadside attraction remains one of the most underrated Finger Lakes waterfalls. Hector Falls certainly isn’t much of an adventure; however, it’s jagged, frozen cascades are nothing short of spectacular.

Hector and Ithaca Falls could practically be siblings. They resemble one another, but neither requires much of a hike, which is undoubtedly a perk during winter’s icy peak. Ithaca Falls is best visited in January and February when temperatures reach their lowest points, as it’s quite exhilarating to skate on the pool of water under the frozen behemoth.

Eagle Cliff, also known as Haven Glen Falls, is a hidden gem if there ever was one. A short walk from a sizable picnic area leads you to a quiet, gloomy gorge where a towering, skinny creek spills into a sizable pool. The gorge walk is reminiscent of some elements at Watkins Glen, which is only four miles northbound.

Buttermilk Falls State Park’s crown jewel, its staircase-style waterfall, remains one of the city’s most beloved four-season attractions. The park shares a border with La Tourelle. Thus, guests can easily meander into the Buttermilk to “snap” photos of the main fall and explore the surrounding topography.

After visiting one or two of the best waterfalls in New York, return to La Tourelle for an extravagant evening. La Tourelle is not only one of the most prestigious hotels near Cornell University, but it’s a world-class spa destination and a culinary staple. With Buttermilk Falls within steps of the 70-acre estate, this historic Ithaca hotel allures a bevy of outdoor enthusiasts. However, the various luxuries, combined with the historical significance and architectural elegance, allure travelers of all kinds. The Bistro at La Tourelle is a culinary voyage worth revisiting time and time again, especially for those with a penchant for farm-to-table cuisines. Please give us a call today at 800-765-1492 to book a well-deserved wintertime escape to Ithaca (or check availability online). 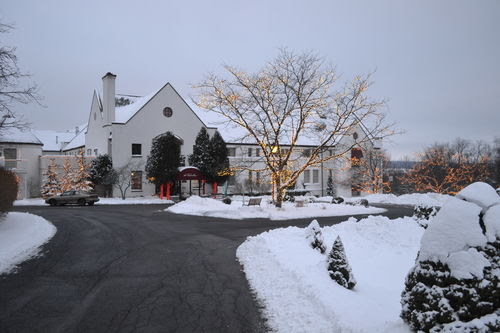